The ancient Greeks and Romans knew the use of Glass and quartz lenses. In the 14th century, spectacles and lenses were used to magnify objects. Galileo had constructed a microscope at the same time  (1610). It was employed for the study of the arrangement of the compound eye of insects. Anton Von  Leeuwenhoek (1674), the father of biology was the first to use the microscope for biological studies. His microscope has consisted of a single lens with a higher power of magnification. The compound microscope was constructed by Robert Hooke (1665) and is the forerunner of the present-day compound microscope.

The simple microscope distinguishes between two points that are less than 0.1mm apart when placed at a normal viewing distance of 25cm. The two points appear as one and the eye fails to resolve or distinguish them as two distinct points. Another limitation of the human eye is that it cannot resolve any image less than 5µm.

A simple microscope consists of a single convex lens or a combination of lenses that functions as a convex lens. A convex lens magnifies the objects and also helps to produce a magnified image of a near object which appears to be at the distance of distinct vision.

Where f= focal length, 25 is the distance of distinct vision in cm.

1. Resolving power: It is defined as the capacity of the microscope to distinguish images of two pointed objects lying very close together. If two points are at a distance of more than 0.2 µm,  they will appear as two points in the microscope.

2. Limit of resolution: It is defined as the minimum distance at which two objects appear as two distinct objects or entities. It can be calculated as:

Where 0.61 is the constant representing the minimum detectable difference in contrast  λ = wavelength of illumination

The compound microscope was designed to obtain both magnification and resolving power.  There is a body tube with an ocular or eyepiece mounted at its upper end, and a movable nosepiece turret with 3 or 4 objective lenses. There are two focusing knobs one for coarse focusing and the other for fine focusing. The object stage is a rigid platform with an aperture through which light rays can pass. The light source may be external or built into its base, illuminating the specimen. The sub-stage condenser lens gathers the diffuse rays from the light source and illuminates the specimen with a small cone of bright light that allows very small parts of the specimen to be seen after magnification.

A third lens system located in the front of the eye uses the virtual image produced by the ocular lens as an object to produce a real image on the retina. When the focusing knob of the light microscope is turned, the relative distance between the specimen and the objective lens changes, allowing the final image to become focused precisely on the plane of the retina.

The phase contrast is obtained with the help of the phase plate and the annular diaphragm by separating the central or direct rays from the diffracted rays. The annular diaphragm is placed below the condenser. It has a special shape such as a slit or annulus which separates two sets of rays: i.e. central or direct rays and the diffracted rays. There will be some degree of overlap between two sets of rays but this will be restricted to a comparatively smaller area occupied by the image of the annulus.

Apart from this degree of separation between the two sets of rays, the phase-contrast microscope also alters the phase and usually the amplitude of one wave in relation to the other. This is achieved by inserting an annular phase plate at the rear focal plane of the objective.

The phase plate is a transparent disc containing an annular groove. The groove is made to coincide with the image of the aperture of the annular diaphragm at this plane. The direct rays pass through the groove and whereas the diffracted light rays pass through the region outside the groove. The depth of the groove is adjusted to obtain the desired phase difference between the two sets of rays. There are many types of phase plates but the most common types are with the annular groove (positive phase plate) or an annular ridge (negative phase plate). 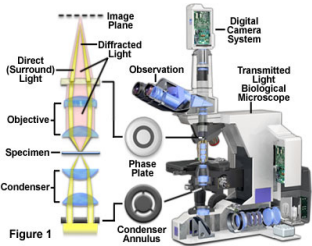 Electron Microscopes consist largely of a tall, hollow cylindrical column through which the electron beam passes and a console containing a panel of dials that electronically control the operation in the column. The top of the column contains the cathode, a tungsten wire filament that is heated to provide a source of electrons.

Electrons are drawn from the hot filament and accelerated as a fine beam by the high voltage applied between the cathode and anode. Air is pumped out of the column, otherwise, electrons would be prematurely scattered by collision with gas molecules. A beam of negatively charged electrons is focused by electromagnetic lenses,  which are located in the wall of the column. The strength of magnets is controlled by the current provided to them.

By altering the current applied to the various lenses of the microscope, magnifications of an electron microscope can vary from about 1000 times to 250,000 times. Electrons that have passed through the specimen are brought to focus on a phosphorescent screen situated at the bottom of the column. Electrons striking the screen excite a coating of fluorescent crystals, which emit their own visible light that is perceived by the eye as an image of the specimen.

The scanning electron microscope is extremely useful for studying the surface structure of thick specimens. It is also called surface scanning electron microscopy (SSEM). The electrons do not form the image by being transmitted, but by getting emitted from the surface of the specimen.  The illuminating system of SEM is similar to TEM. The electron beam is, however, compressed with the help of one or more condenser coils, which results in the formation of an electron probe that is nothing but a narrow pencil of electrons.

SEM is mostly equipped with at least two CRTs. One CRT is used for visual observation of the specimen and the other is used for photography. The visual display CRT gives a persistent image which is useful for providing a selection of sites for observation and focusing. It is because this screen has a long after-glow. The photographic screen does not have a persistent image. It has very little after-glow and is meant for photography only. 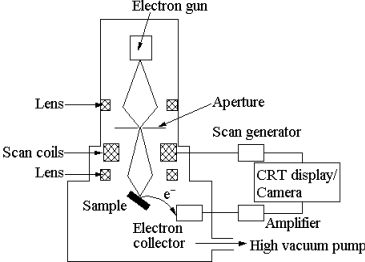