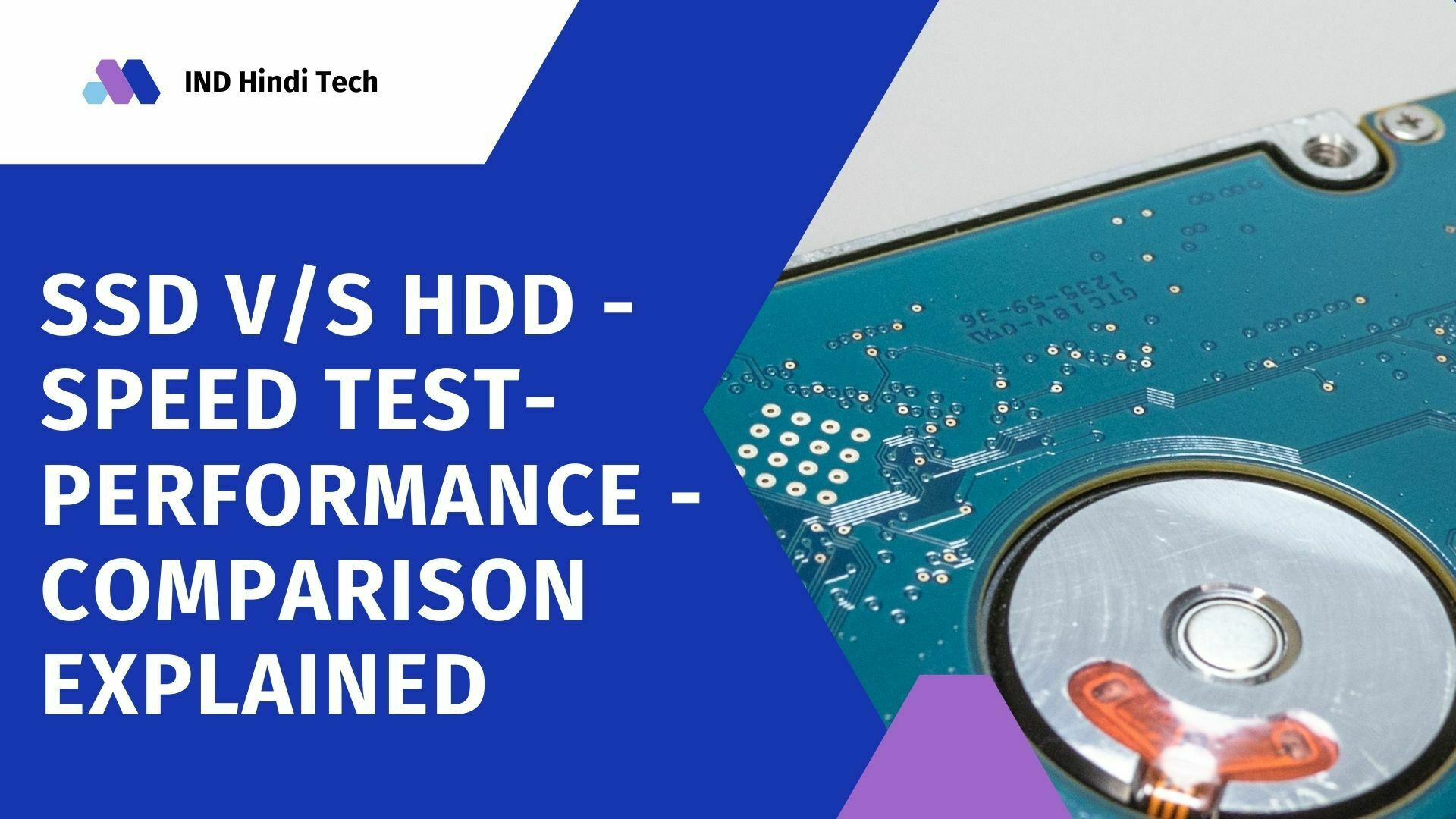 SSD v/s HDD – SPEED TEST- PERFORMANCE – COMPARISON:- What’s up guys I’m Om Prakash here from IND Hindi Tech so today in this article I’m going to discuss about hard disk drives and solid disk drives so whenever we have to buy a laptop, computer, or have to assemble it manually we are pretty much sure about their component like processor graphics card ram but when it’s come to storage we always have a doubt in our mind whether we should go with a hard disk drive or have to go over with solid disk drive so today in this article I’ll tell which one is a better option for You. So let’s get started.

A hard disk drive uses a small moving part to seek out the data on a spinning platter mechanically this is based on a legacy technology remember lp recorder where it has a head and a magnetic disk run below it same way a hard disk works where we have several platters mounted over each other and ahead process data from it and typically the data is stored in the form of track and segment the speed of processing the data depends upon RPM that is revolution per minute higher the number of revolution higher the number of reads and write the data.

Now when we talk about solid disk drive it uses flash memory which is based on nand logic to store and circulate the data nand is not an acronym but it’s a logic circuit refers to not an and gate which stores the data as the quantity of electron also known as charge flash trap in simple term it uses a digital way to store the data which make it blazing fast compared to hard disk drive mainly when the system wants to transmit small pack of data all over the time all over the places so when you want to run something like an operating system a game or a complicated application where they want to interact with your system all the time with a small package of data here solid disk drive kills hard disk drive response time drastically.

For example the boot time of window OS ( OPERATING SYSTEM) using a solid disk drive take less than 10 seconds however at the same time hard disk drive takes more than 20 to 30 second to boot.

A mechanical way to store the data in the hard disk drive, It makes it less reliable in other departments as well first when we talk about power consumption, since there are “no any moving part in solid disk drive” it consumes less power compared to a hard disk drive which allows Laptop or Computer to run long last on a battery.

Now coming to reliability absence of a moving part, In solid disk drive make it more reliable which helps in reducing the vibration and the shock resistance as compared to the hard disk drive.

Also, the solid disk drive is much more durable as compared to a hard disk drive which ensures to keep data secure in case of accidental drop and wear and tear since solid disk drives have none of the small moving parts they are less prone to failure.

So what we can do to get the maximum benefit out of these two drives the best answer is to go for a hybrid system where you can have a solid disk drive for your operating system games antivirus and other applications where the high speed of data transfer is required and rest where you need constant streaming of data to use hard disk drive, like your photos, videos, and music.

Now the latest upgrade of the solid disk drive is M 2.0 where we have the almost same advantage in a smaller size this looks like similar to ram.

So this was all about the hard disk drive and the solid disk drive if you want to know more about how to create a hybrid drive let me know in the comment section, I will try to include it in my next Articles with your name give a thumbs up in the Comments Box if you enjoyed this article. And share with your Friends and Loved Ones. Also, Do not forget to subscribe to our Newsletter for more Such awaiting Articles.

What Is The Full Form Of SSD?

What Is the Full Form Of HDD?

Which One Is Better SDD or HDD?

To Know More about this Read Out Our Above Mentioned Article.